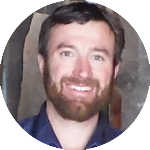 My mother, Susie, has been living with younger-onset Alzheimer’s for the past decade. She’s in the late stages and has lived at a memory facility for the last three years. My father, Wayne, was her primary care partner, then caregiver, for the first seven years. As their only child, I helped out when and where I could; however, living in different parts of the country made this challenging. I spent parts of a few summers when I was a high school science teacher helping my father and mother in the middle stage of the disease. A few months before we moved my mother into a memory facility, I moved back in full time with my parents to help out.

I don’t think I have the words to paint a complete picture of the impact this disease has had on my family. It’s been years since my mother consciously stated that she recognized me.

What has been the most difficult aspect of the experience?

The ambiguous loss and complicated grief that Alzheimer’s brings into the lives of those not only living with the disease but also their entire community of people has been the most challenging aspect. Things like watching my dad miss my mother at every turn in life presently, even though she’s still alive and present on the planet. My wife and I are having our first child in May, and knowing that our child will never get to have Nona Susie read them a bedtime story breaks my heart.

What's been the most positive aspect of it?

Becoming involved on the advocacy front, both at the national and state levels. I’ve met so many people wearing my same shoes who are leveraging the power of their voices and stories to change the trajectory of this disease. I’ve seen us have success and make a difference in the last few years. It’s helped take a situation that often feels so utterly helpless and flipped it to one of empowerment and change.

I first became involved with the Alzheimer’s Association when I attended a support group years ago. I then hosted my own The Longest Day® event while living in Wyoming. When I moved to Vermont just over three years ago, I became connected to the local Association chapter. I presently serve as chair of the chapter’s Leadership Board and Ambassador to Sen. Leahy, and I help plan a third-party fundraiser called the Camel’s Hump Ski Challenge.

It’s been empowering to say the least. Sen. Leahy is vice chair of the Senate Appropriations Committee, so he carries a long stick inside the Beltway. It has been wonderful to work with his team in both D.C. and in Vermont. They’re very sympathetic toward our cause and very supportive behind the scenes.

Have you attended the Advocacy Forum? If so, what’s the experience been like?

I’ve attended the last two Forums, though I’ll miss the 2019 event because of the proximity of the due date for our first child. The Forum is a top-shelf event. I was blown away by how powerful the programming is throughout the entire three days. It’s mentally, emotionally and physically draining in the way that when I look back after the event, I can honestly say it was one of the best opportunities this disease has provided.

Meeting Alzheimer’s advocates who are wearing the same shoes. You won’t feel alone. If you’re able to go, GO. You won’t regret it. The Forum has helped me grieve and heal from the pains of this disease, and no price tag can be put on this fact.

How optimistic are you that the Forum can play an integral part in making Alzheimer's a national priority?

I think it’ll continue to play a large role. Our advocacy stories and presence inside the Beltway are a must to elevate the conversation about this disease at the national level. We must come out of the shadows and share our stories and continue to yell and scream. This effort is not a sprint but a marathon, like the disease, and the more purple we have in the halls of Congress, on the sidewalks and inside the Beltway the better. To truly elevate this disease, we need to have advocates wear purple to the ballot box and let those they vote for or against that the reason they did so was because of their stance regarding Alzheimer’s.

In what ways do you think we can continue to increase the number of advocates and engage them in the fight?

Let advocates know that everything matters. Big things and great things shouldn’t be the focus of all advocates; quick calls, an email, anything that people can do to share their stories makes a difference. I think it’s easy to feel too small as an individual, and thus apathy and inaction arise. Encourage small-scale and local advocacy. This will make it more approachable to the masses. We need advocates at their local elections voting with Alzheimer’s in mind.

What more do you think needs to be done to fight the disease?

I’d love to see more effort and focus on care, support and training of the entire health care system regarding Alzheimer’s. I wish that cognitive ability/impairment would be treated as a vital sign. I think that if providers were reimbursed for performing cognitive screenings at yearly checkups, the stigma associated with cognitive function and decline would slowly fade. The health system would then hopefully be able to have a more honest conversation with people about their cognitive health. Having longitudinal personal history can be used to get ahead of mild cognitive impairment and possibly Alzheimer’s, and even without treatment or a cure, individuals and families could better plan for the heartbreaking and exhausting road ahead that Alzheimer’s brings — with a trained health care system behind them for support.