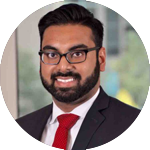 John George, 24, lives in Weehawken, New Jersey, and works in investment management. He’s an advocate and Alzheimer’s Association AIM Ambassador to Rep. Albio Sires (D-N.J.) despite not having a personal connection to the disease.

Why do you fight for this cause without having experienced it with a family member?

In January 2017, I was parsing through the news and came across a headline about a person living with Alzheimer’s. His wife recorded a video asking him questions about what it’s like to live with the disease. During this four-minute video, he broke down and cried, saying that he wished his friends would come around like they used to, and joke and hang out him. I saw a man in his mid-60s crying because he recognized the stranglehold the disease had on his mind. This man dedicated his life to serving others as a teacher for 27 years. He made millions of memories with his wife, now his caregiver, and those memories were at risk of being taken away, one by one, until none remained. I couldn’t believe that one disease had done so much damage to so many different lives across the country and the world. Later that day, I chased down the contact information of Katie Macklin, senior director of Advocacy and executive director of the Alzheimer’s Association Delaware Valley Chapter; luckily, she was covering the state of New Jersey as well, and they were in need of an Ambassador in Rep. Albio Sires’ district.

What are some of the activities you've taken part in as an Alzheimer’s Ambassador?

Since I became an Alzheimer’s Ambassador, I’ve participated in the District-Forum-District program, which consists of two meetings in New Jersey’s 8th Congressional District and one meeting in Washington, D.C., with my representative’s staff. I was also given the chance to host a film screening of an Alzheimer’s documentary for The Longest Day® in 2017. It was attended by advocates, friends, family and staff members from local, state and federal legislative offices. Finally, I attended the State Advocacy Days arranged in our state capital, Trenton.

What's been the most positive aspect of your involvement?

It was attending the 2017 Advocacy Forum, the most inspiring three-day period of my entire life. The first two days were peppered with stories from caregivers and individuals living with Alzheimer’s, as well as technical talks on public policy and scientific advances. Although these stories were heartbreaking, it helped me understand why we fight so hard. Leaving that Advocacy Forum was bittersweet. Once I returned to my home district, those stories re-energized my advocacy efforts.

I believe I’ve motivated young advocates around me to join the fight. It’s extremely important to engage the younger generation. Most of the representatives and decision-makers rely heavily on technology as a medium to communicate with their constituents. Young advocates were born into this environment and hold many skills likely to effectively reach elected representatives. If I can continue to generate interest from that demographic, I’ll be extremely satisfied.

How important is a diverse group of advocates to the success of the cause?

It’s very important. As we all know, everyone has a different story and a different experience with the disease. Certain demographics are more likely to develop Alzheimer’s than other demographics. Without all of these voices involved in the nationwide conversation toward finding a cure, we won’t make any advances. The efforts to combat the disease need to accurately represent the population affected by the disease.

You mentioned how inspiring your first Advocacy Forum experience was. What exactly did you find so inspiring?

The stories from caregivers and people living with Alzheimer’s. The numbers are easy to understand; the everyday stories, much less. I quickly realized, within a month of becoming an Alzheimer’s Ambassador, that the struggles of the more than 5 million Americans living with the disease are never-ending. We always hear that there’s no cure or treatment to slow down the advancement of the disease, but when I had the chance to listen to how this affects the daily lives of people living with it, and their committed caregivers, it broke my heart. It forced me to take stock of the blessings I have today and develop a healthy respect for the power of the human mind.

Did you have anything that stood out as a favorite moment?

My favorite part of the Advocacy Forum was meeting people from all over the country, with different backgrounds, that chose to come together for a cause that touched each and every person in the room. During the Forum, we were still in a very contentious political climate. We put all of that aside and talked to each other, not as if they were across the political aisle but as if they were family.

Did you attend Hill Day? What was that like?

As someone who’s always been fascinated by how government works and the power of the people to get things done in Congress, witnessing and playing an active role in talking to Sen. Booker, Sen. Menendez and many other members of Congress was like a fever dream for me. Finding out later that our legislative and research funding asks were met validated the entire experience and reinforced the idea that when people come together for a cause, change happens.

We need a considerable amount of research funding. Without that, we’ll struggle to find a cure. Alzheimer’s advocates, including myself, will stop at nothing to keep fighting for increased funding at the National Institutes of Health, regardless of budgetary threats.

What would you say to someone who was considering attending the Advocacy Forum but maybe wasn't sure?

It’s a life-changing experience. I usually listen to music when I’m on long drives. Last year after the Forum, as I made my way back to New Jersey from D.C., I drove in silent, deep thought about those lives that were forever affected, but not defined, by the disease.

How optimistic are you that the Forum can play an integral part in making Alzheimer's a national priority?

I’m very optimistic because I’ve seen first-hand that this type of advocacy works. We’re receiving national and global attention. Each presidential candidate from the 2016 cycle mentioned Alzheimer’s during their campaigns. Bill Gates has committed millions in funding. We had landmark legislation passed already this year. We have momentum right now, and if we continue to come together to detail our plans for success, we have a better chance of making Alzheimer’s a national priority.